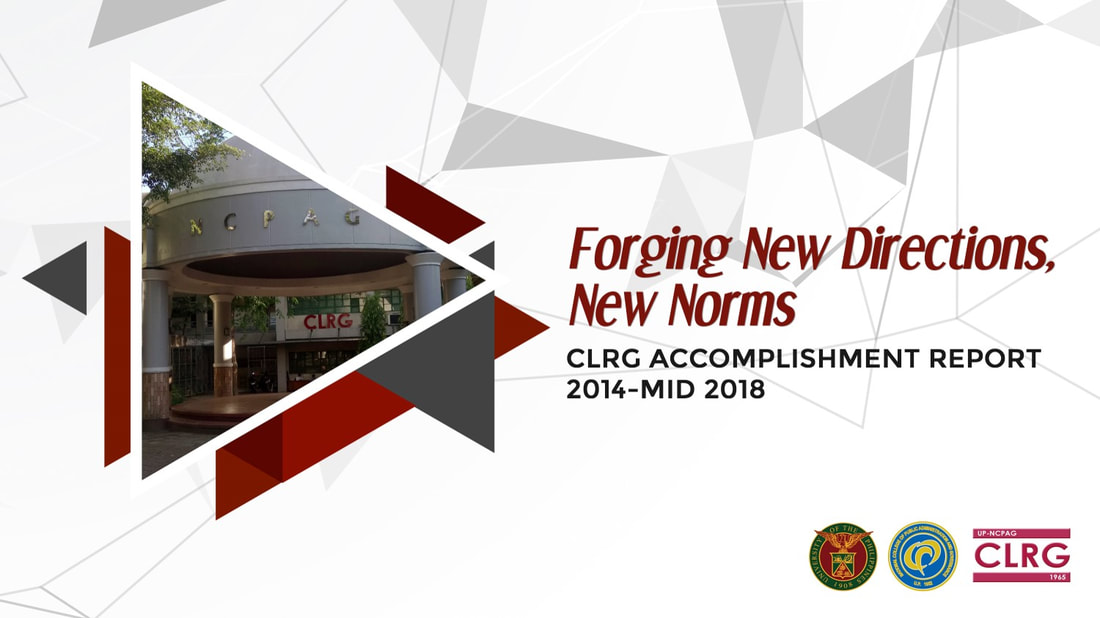 ​The Center for Local and Regional Governance has been in existence for more than half a century. It is mandated to conduct research, training and extension work for local governments and celebrated its golden anniversary in 2015. Part of the celebrations then, included some reminiscing of CLRG’s history, through lectures, a coffee table book, and personal accounts and sharing of pictures.

​In looking back, we rediscovered how the Center has been a witness to the powers, flexibility and limitations of the Local Government Code. It saw the birth pains, small successes, islands of good governance and continuing mediocrity of some LGUs. It has partnered with public and private institutions alike to further the purpose of capacitating key local governance stakeholders, from handhold development planning, training, to process improvement and system review. All these were done to make LGUs the enablers of their local development.
(CLICK PHOTO TO DOWNLOAD REPORT)
More important, however is what came next. Beyond that first half century, CLRG continues to reinvent itself and remain relevant to the times.  This report, is meant to be a testament to the fact that in CLRG’s daily grind and seeming seasonality in the delivery of services, it has compiled a rich trove of experiences and new knowledge along the way.

Its projects and services are indicative of the issues that confront local governance during this period (2014-2018). In making this report, we hope that documenting them provides a just accounting of the center’s contribution to the ever changing local governance landscape during this time.

During this period, there were pre-identified issues and events that we expected to tackle.  This included assessing 25 years of the local government code, celebrating 75 years of Quezon City, revisiting 30 years of democracy since EDSA, as well as moving towards the next set of development goals agreed upon by the world of nations.  We anticipated the growing prominence of disaster mitigation, resilience and management, and the ever looming presence of climate change. We also considered the growing role of information and communication technologies, the push for open governance and the desire for more autonomy in the Bangsa Moro region. However, there were also unanticipated priorities that political change also wrought.  Issues like drug addiction, human rights, inclusion of persons with disabilities, and a push for a Federal form of government, were issues CLRG also had to understand and get involved in.

Collating what has happened and what the Center has done in the last five years serves as a reminder to us of the sometimes lonely, yet always fulfilling work we do.  We have been blessed with an energetic and ever developing staff, and a network of partners and community that made everything in this report possible.